What makes salmon such interesting and charismatic creatures? Is it their importance to brown bears? Is it the commercial and recreational fishing opportunities they provide? Is it the promise of food through a long winter? What about their epic migrations and battle against the odds?

Of course, all of these things make them interesting and important. For a moment though, consider how salmon are important in other ways that might not be obvious. Salmon are conveyor belts of energy and nutrients. They are the keystone that turns impoverished land and water into productive and vibrant landscapes.

Salmon provide the energy necessary for bears to grow large and fat over the summer and fall. Katmai’s bears are larger and achieve greater reproductive success compared to bears without salmon in their diet. In Katmai, most of a bear’s yearly calories comes from salmon.

Salmon also provide food for dozens of other species, including fish and invertebrates. Many different fish species gorge on salmon fry and smolt in the spring and salmon eggs in the fall. Anglers often catch arctic char and rainbow trout with stomachs visibly distended with salmon eggs. In the winter, these fish may not eat much at all. They, like bears, are surviving on the energy brought to them by salmon.

Even decomposing salmon are vital to the ecosystem. Dead salmon provide tons of nitrogen and phosphorus that fertilize nutrient poor freshwater lakes and streams. These nutrients boost the primary productivity of plankton, which in turn feed salmon fry. Without this yearly boost, streams and lakes could not support high numbers of salmon fry. Riparian vegetation also grows quicker along salmon streams.

What would the loss of salmon mean for a place like Brooks River? Most people come to watch bears and fish for trophy-sized trout, grayling, and char. Without salmon, Brooks River would not be a world famous fishing destination, because there would be no large fish to catch. Without salmon, no one would visit Brooks Camp to see bears, because no bears would gather here. For thousands of years, people fished at Brooks Falls for salmon too. Even today, salmon are the heartbeat of the area’s culture and economy. Without salmon, the economy of Bristol Bay and Southwest Alaska would collapse.

The survival of the modern day Katmai experience, the ecosystem as we’ve known it, and the history of Brooks River is intimately tied to these fish. They are, without doubt, Katmai’s keystone species.

The rivers, lakes, and streams of Bristol Bay host the closing acts of an epic migration. Each summer tens of millions of sockeye salmon leave the North Pacific, instinctively driven to return to the exact spawning grounds where they hatched years earlier. For several hundred thousand salmon the path leads up Brooks River.

Near the summer solstice, sockeye salmon begin migrating into Naknek River from Bristol Bay. From there, salmon swim into Naknek Lake and reach Brooks River. This is the final stop for some fish; here they will spawn and die. For others, the voyage is not quite over. Their destination lies beyond Brooks River, in the small tributaries of Lake Brooks.

Using their tails, female sockeye excavate a series of nests in the river bottom. Males don’t dig nests, but they viciously fight with other males for access to females. When a female judges a nest to be just right, she releases eggs in it. Simultaneously, the attending male fertilizes the eggs with milt. Then the female buries the eggs in gravel. Once spawning is complete, a female will defend her redd as long as she can. Male salmon move on and may attempt to fertilize the eggs of other females. After spawning though, salmon are on borrowed time. Spawned-out and with their life purpose complete, they will never return to the ocean. They slowly weaken and die.

Eggs incubate for about four months. After hatching, the tiny larval fish, called alevin, remain in the gravel until they emerge as fry in spring. When large enough, young salmon fry move from streams to lakes, where they stay for one to two years.

Salmon fry become smolt when they begin to migrate downstream to the ocean. Salmon smolt imprint on their natal streams and lakes while migrating to the ocean. Along this journey, they undergo many physiological changes to prepare for a saltwater existence. Salmon smolt are about to enter a totally new environment, whose conditions they cannot know until they get there. Substantial changes to the kidneys and gills are required for the fish to survive the harsh transition from freshwater to the salty ocean. Sockeye salmon feast in the North Pacific for two additional years. There they grow into the large and beautiful fish who return as adults to spawn.

Predator and Prey at Brooks River:

What might cause bear abundance to vary at Brooks River? This is a tale of predator and prey over years, months, and minutes. Comparing overall bear numbers with salmon escapement reveals a long term relationship. Escapement is the number of fish not captured by commercial fishing and migrating inland to spawn. The number of bears at Brooks River has risen and fallen over the past 15 years and seems to closely parallel a rise and decline in salmon abundance. Large runs of salmon support greater numbers of bears and increase reproduction rates. Like many predator-prey relationships though, predator numbers lag behind prey abundance.

Bear numbers can also be tracked over a month’s time scale. Since the late 1990s, rangers at Brooks Falls have counted bears, salmon, and people at Brooks Falls. From late June to early August, staff record individual bears seen at the river near the falls and the number of people standing on the Brooks Falls wildlife viewing platform. Jumping salmon also are counted for one minute to document their relative abundance. This data is collected every half hour from approximately 9 a.m. to 4 p.m. When this data is compiled and tallied on a graph (Figure 1), a clear pattern of relative bear abundance emerges for July. The numbers of jumping salmon peak during the first two weeks of July. This reflects the peak of the sockeye salmon migration into Brooks River. Bear numbers increase steadily from late June and peak in the third week of July

Bear numbers at Brooks Falls also vary considerably on a day to day, hour to hour, time scale. During extreme highs in salmon abundance, fish are so plentiful and easy to catch that many bears are satiated quickly. At these moments, bears spend less time fishing, because they get full and move out of the water to rest. When lesser numbers of salmon are seen at the falls, bears often spend more time fishing and more bears are seen. When you watch salmon and bears at Brooks Falls, look for these patterns to emerge. It’s a real life drama of predator and prey.

This graph plots the average number of bears observed (blue bars) and salmon jumping (red line) on a daily basis at Brooks Falls in July. Bear numbers typically peak in mid July after the majority of fish have migrated through the river.

Salmon Seen In The Brooks River:

2015.07.01:  DTB captured this video of the salmon jumping Brooks Falls.  DTB shared this information about her video (and the salmon she worked with) ~ "The Salmon are jumping like popcorn at Brooks Falls.  I taught and choreographed them myself.  Salmon are NOT easy to work with":

2016.07.13:  DTB captured this video of an Insane amount of salmon at the falls.  The salmon run was in full swing this evening, with a gazillion trying to jump the falls.  Crazy!:

We're busy preparing for the upcoming bearcam season. As noted in the featured comment there is no set date for the bearcams to go live, so we ask for your continued patience while the bearcams are fine tuned for live streaming. More than just a little fine tuning is needed at the river mouth, however, due to the construction of an elevated bridge. Technicians are hard at work to install cameras from multiple locations on the bridge.

Bear activity along Brooks River has been relatively quiet over the past few days, although several bears have been seen in the area. I can confirm that 32 Chunk, 132 and her yearling, and 634 Popeye have been here in the past few days. At least two or three subadult bears have wandered through too. The first trickle of sockeye salmon have arrived as well.

I'll be here until mid July. Along with John and Naomi, we will be hosting many live video chats, text chats in the comments, and play-by-plays from the river. Stay tuned for more updates and live event schedule announcements. We'll post those as soon as we can." 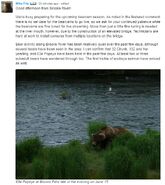 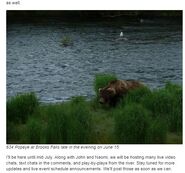 Mike Fitz' June 16, 2019 11:37 comment re: 1st sockeye salmon of 2019 season are being seen at Brooks Camp (part 2 of 2)
Community content is available under CC-BY-SA unless otherwise noted.
Advertisement