747 Fishing at the Falls in the Morning:

At approximately 06:50, Cruiser captured this video of 747 during sunrise:

Juergen created these gifs of sunrise from the Dumpling Mountain cam and the Lower River cams.

Gif #2 from the Lower River

435 Holly and her two yearlings were observed on the Lower River East cam (River Watch feed) at approximately 11:07 :

747 Fishing at the Falls Again & Finally Catches a Fish:

747 was fishing at the falls again.  At approximately 13:18, he successfully caught a fish in the jacuzzi.

Live Chat from Dumpling Mountain at 14:00:

51 Diver Junior Arrives at the Falls and Attempts to Fish in the Far Pool at approximately 14:45:

Martina captured this video that includes the footage of 51 Diver Junior:

409 Beadnose was in the riffles at 15:49 .  51 Diver approached and followed 409.  409 evaded him by doing a circle near the Riffles platform and doubling back upriver .  She didn't seem the least bit interested .

409 Beadnose and 151 Walker spent some time together in the riffles.

There was an unknown boar at the falls.  Ranger Jeanne and Mike Fitz were not able to help us with an ID of this bear : 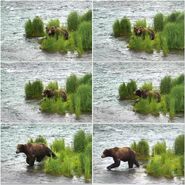 747 Asserts His Dominance Over An Unknown Boar at the Falls:

747 asserts his dominance over an unknown boar at the falls: Xander-Sage created this gif .

409 Beadnose Moves from the Far Pool to the Lip of the Falls:

409 Beadnose moves from the far pool to the lip of Brooks Falls:

274 Overflow Returns to the Brooks River for the 2018 Season:

274 Overflow returns to the Brooks River for the 2018 season and returns to his classic position on the table rock:

Underwater Cam and the Diving Waterfowl at approximately 21:03:

BearBell captured a diving waterfowl diving on the Underwater cam at 21:03 :  Snapshot #1 & Snapshot #2

"Good Morning Bear Peeps We had a lot of bear activity yesterday. First thing in the Morning 747 was at the falls in the J and far pool, he left and came back a couple different times throughout the morning. (video by SteveCA). 435 Holly and cubs are seen walking up spit road out to the spit where they cubs play (video by BrendaD).

747 is back at the falls later in the afternoon he catches quite a few salmon in the J and eats them on the island. We see him notice someone crossing the lip of the falls, its 151 Walker and 747 climbs the fish ladder and chases 151 all the way across the top of the falls and down toward the riffles along the upper bank (video by BrendaD).

51 Diver Jr shows up from the top of the falls and goes to the far pool to fish (video by Ratna). 435 Holly and cubs are seen briefly on the LR near the bridge (gif by PKilborn). 409 Beadnose is up at the falls and down to the riffles and back again. She is pursued by 51 Diver Jr but loses him and comes back to the riffles. A bit later she is approached in the riffles by 151 Walker and she gives him a big NO (video by SteveCA).

747 Catches some more salmon in the J and then heads up the far path (video by Ratna). Bear is seen napping on the spit and then walks down spit road, believe to be 274 Overflow. Up at the falls an unknown bear is seen on the island (video by Ranta), then near the J. He heads over to the far path and has a little meet and greet with 747. (Video by BrendaD)

274 Overflow is seen heading up to the falls from the riffles and meets 409 Beadnose there, they both go to the falls.Beadnose heads to the lip video of Beadnose on the by BrendaD, video of 274 at the falls by SteveCA.747 is back at the falls and is in the J, he has a little meet and greet with an eagle near the island (video by SteveCA).

pic of Merganser diving caught by BearBell on the UW cam :

Album of the day with pics and gifs by Juergen

Retrieved from "https://katmai-bearcams.fandom.com/wiki/Monday,_June_25,_2018?oldid=23349"
Community content is available under CC-BY-SA unless otherwise noted.