We have very little information about this 720, an adult female that was last officially observed in July 2006.  The only other thing that we know about her is that she had two yearlings in 2005.

What is interesting about 720 is that her bear monitoring number was recycled in 2016, after she had not been observed during official bea rmonitoring sessions for 10 years.

The number 720 was reused in 2016 to identify a subadult female that was first officially observed in Fall of 2016 .

720 has now demonstrated for us how the bear monitoring data numbers are used and then recycled after a bear has not been observed in a long period of time.

720 would have had spring cubs in 2004, but we have no other information available to us about that litter. 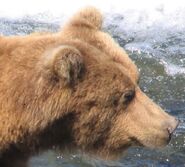 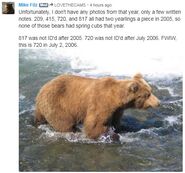 Only Known Litter to Us:

Retrieved from "https://katmai-bearcams.fandom.com/wiki/720_(Adult_Female,_No_Longer_Seen,_Last_Officially_Observed_in_July_2006)?oldid=33148"
Community content is available under CC-BY-SA unless otherwise noted.