Known Offspring Of: Unknown to us at this time

006 Headbob / Bullett has an orangish-blonde coat, his left ear is flopped over, and has a dog-like muzzle.  He also has a thin lower lip and dark claws.  Overall, he has an old appearance.

006 Headbob / Bullet can be confused with 211 Backbite who also has a droopy lip and ear, but 211 Backbite is darker, stockier, lower to the ground, and a more barrel shaped torso.

006 Headbob / Bullett is one of the oldest and most recognizable bears in Katmai due to his preferred fishing spot at the top lip of the falls.  He was classified as an adult in 1988 and is believed to be one of the oldest bears frequenting the Brooks River.   Despite his old age, he frequently displaces younger males at the top of the falls.  In July, he fishes the lip, but will also fish the in the far pool and the jacuzzi, and he will occasionally steal fish.  He is often seen fishing in, or sleeping on the banks of, the lower river late in the season. When fishing at the top lip of the falls, 6 Headbob / Bullet typically stands in one spot waiting for fish to jump within range rather than shifting locations.  He can sometimes be observed holding his head out with his neck extended, then raising (bobbing) his head upward once or twice in quick succession as if sniffing the air.   After being observed for more than 20 consecutive years, he has not been seen since 2010.

6 Satulik / Bullet / Headbob was initially observed and classified as a young adult in 1988.

6 Satulik / Bullet / Headbob July 1988, the 1st year he was classified using Brooks River. NPS photo from the 2012 Brown Bears of Brooks Camp iBook
Add a photo to this gallery

Park visitor mb1968ca captured this video of 6 Headbob fishing the lip in July 2007:

KNP&P captured this video of 6 Headbob backing 604 Little over the falls.:

"Panda" is a nickname we have seen pop up over the years, but we had never discovered a connection to a "known" bear prior to noticing a comment below the above KNP&P video where ShinetheLightofTruth refers to 6 Satulik / Bullet / Headbob as "Panda": 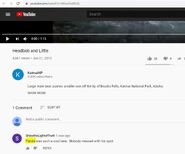 6 Satulik / Bullet / Headbob was one of the oldest bears that frequented the Brooks River when he was last observed in 2010.  He was observed for more than 20 consecutive years.

6 Headbob / Bullet was included in the 2012 Brown Bears of Brooks Camp iBook.:

6 is a bear that has been identified with various nicknames over the years.  Park staff used the following nicknames during the years 6 was observed using the Brooks River.:

It is not known to us how 6 was given the nickname Satulik in 1986.

6 would often bob his head up and down while fishing the lip of the falls, hence his nickname of Headbob.

Retrieved from "https://katmai-bearcams.fandom.com/wiki/6_Satulik_/_Bullet_/_Headbob?oldid=48831"
Community content is available under CC-BY-SA unless otherwise noted.